Now I didn’t want to make a big deal about this during campaign season, but I imagine with the elections over, I am free to speak my mind. For after all, how often do we political spouses really get to share the gritty stuff? And you – my handful of readers – will be pleased to know that with my injury slowly healing, I will have few additional boring references to bandages, crutches and scooters in the future.

Let’s just say, it was because of the Mayor that I was invited to play in the 2015 and 2016 West Linn Old Fashioned Baseball Games. For really, our Mayor is a generous guy and knows how much I love playing baseball. For the record, do know that the big July 2015 game during West Linn’s Old Fashioned Fair went by without a hitch (although perhaps it’s now important to note that the mayor didn’t hit so well that first year, and the only other female player did get injured in the first inning). But I was asked again by the Mayor if I wanted to play in this past July’s 2016 game, and of course, I jumped at the chance.

So although the Mayor did encourage me to wear “tennis shoes” – it seemed obvious to me that a pair of Addidas or Nikes wouldn’t be particularly authentic to our 1880-ruled game. Just before the first pitch was tossed, both teams were reminded about the rules – different than what we know today: a hit caught on a bounce is out (the ball is baseball-sized, but a bit softer), no gloves (yup), and if you don’t ring the bell after making it around the bases to home your run doesn’t count. I was pretty pleased to hit the pitch that first inning and end up on first base. But who would have expected our Mayor – exhausted and stressed as a small-time mayor might be these days – to power out a hit that knocked me all the way home? Or that I would be compelled to run past home plate (okay, I couldn’t see it…really!) and tweak my body around to slam my left foot down on that home plate, even though what really counted was to ring that bell. The Mayor, as I have learned with other mayoral duties, had to fulfill his responsibility to his team and keep playing, rather than accompany me to the ER for my misdiagnosis. (I waited yet another week to learn I had fractured four metatarsals.) But that’s what we political spouses have signed on for, I suppose. Mayoral duties. (He’s still pretty pleased to share the fact that his triple hit me home, regardless of consequences.)

Now in thinking about this, rather than complaining, perhaps I should be thanking our mayor that I did get the chance to play ball against the Pioneer Baseball Club! For after all, the Pioneer Baseball Club was first formed in 1866 as the original Oregon baseball club: a team then made up of shop keepers, doctors, lawyers and farmers from rural Portland. The club wasn’t for professionals, but was a social opportunity, and, in fact, each (male) member paid 50 cents to help buy balls and bats. Later that year the Pioneer Club travelled to Oregon City to play the Clackamas team, the “Clackamas Nine.” Rules were different in those days – similar to how we played in our summer game – with scores as high as the Pioneer’s win over Clackamas that year: 77-46.

So what about next July? Imagine you’ll find me yelling really good advice from the sidelines to that Mayor as he plays in the Old Fashioned Baseball Game. Or come to think of it, you might find me over near the concession stand eating a really good cone of locally made ice cream. 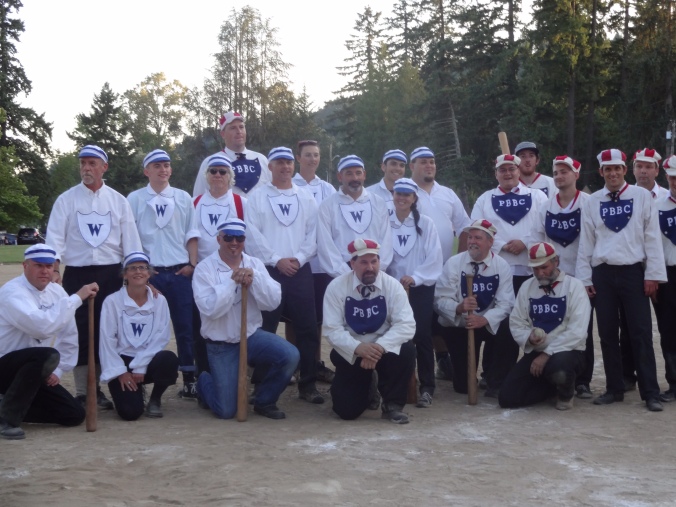 One thought on “It’s because of the mayor”

My Tweets
Join 728 other subscribers