Today, many Portland visitors put Powell’s – advertised as the “City of Books” – at the top of their list of sites to see when they stop in the Rose City. Thankfully, we still have popular small independent bookshops, libraries, and a thriving writing community. And – like in so many other places in the world – book groups are a popular, important social outlet for many.

My grandfather, Richard Gill Montgomery, Sr., was, for sure, a bit of an intellectual. He liked books, writing, playing the cello, and delivering book reviews locally by radio. (See Old time radio is coming your way.) He also just happened to be one of the founding members of the Portland Pipe and Book Club. For fifty years, this male club of book lovers and pipe smokers met in various hotels and restaurants in downtown Portland to talk about books, back in the days before indoor air laws. When the group began, in 1927, my grandfather was reviewing books for the radio. He connected with two other men who had begun to get together to discuss books, Harry Stevens and McDannell Brown. The pitch was made to my grandfather by Harry Anderson, as he drove my grandfather – then employed in his grandfather J.K. Gill’s bookstore – looking at billboards that would advertise the bookstore.

In their earliest meetings of 1927, it was the prohibition, and the men brought their own drinks with them as they first met at the Congress Hotel. That first night there were five of them, including Dick, Harry, McDannell, Harry, and, Howard Perry. The first book they discussed all those years ago was The Worm Ouroboros. That title really got me wondering about its content, and I must admit, that I was fully surprised by its genre. Wikipedia tells me today that “The Worm Ouroboros is a heroic high fantasy novel by Eric Rücker Eddison, first published in 1922. The book describes the protracted war between the domineering King Gorice of Witchland and the Lords of Demonland in an imaginary world that appears mainly medieval and partly reminiscent of Norse sagas.” That is not anything that I would imagine the grandfather of my memories reading. But I must remind myself, that in 1927, he would have been a young man, a man I never knew. The men went on to discuss other books, and even bring in guest speakers, such as Gregory Alexis Ptitsin, a Washington State University graduate who claimed to have fought the Bolsheviks.

The group met the third Thursday of each month, skipping the summer months, first at the Congress Hotel, eventually moving to the Old Healthman Hotel, to the new Heathman, and then finally, back to the Congress Hotel in 1973. Over the years, the attendance grew from six or seven, to upwards of 20. They tried to “diversify” (although I don’t think they meant gender diversification, back then), as my grandfather reported in an Oregonian article in 1977, just a few years before his death, that all the members tended to be businessmen, lawyers, salesmen, and a few doctors.

So what about a Pipe and Book club today? Google can pull a website up for us, with a claim that it represents the oldest Pipe and Book Club, founded in 1927; but the first and last entry appeared to be made back in 2005. Maybe it was those indoor air laws that were the demise of whomever thought they could help it make a comeback. I thank the Oregon Historical Society, yet again, for saving just a few details of this long ago piece of Portland. 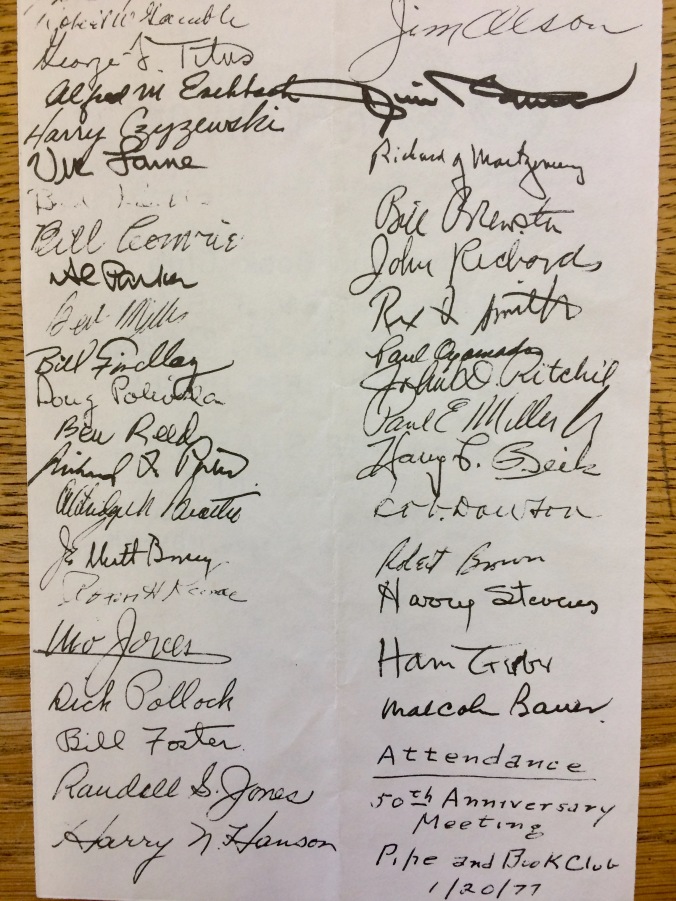