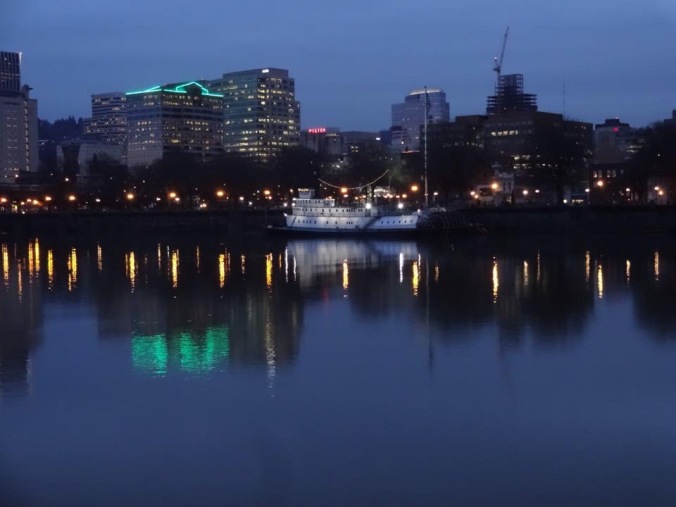 Looking west over the Willamette River, Oregon Maritime Museum in the distance.

As I look ahead to share My Music Man at the Astoria Public Library next Saturday, it’s only natural that I reminisce about the days of steamers. And in today’s world, sated with news, worry, and conflict, it took two nudges to impel my brain to journey back, the second being my offer to lend books – inherited from my steamboat loving dad – to a friend who recently caught the steamboat bug .

Books expand our horizons and knowledge, and sometimes they enhance relationships and strengthen friendships. When I spotted a comment about Bill Gulick’s Steamboats on Northwest Rivers on Goodreads, posted by my now grown daughter’s 8th grade teacher, it was impossible for me to ignore. Soon after, I dropped off a small collection of books on steamboats to his classroom, projecting Dad’s passion upon a younger history seeker. I am my dad’s daughter: I couldn’t help but loiter a few extra minutes to share tidbits about Sam Gill, and the steamboat stories he wrote, protected as the Sam Gill Collection by the Oregon Historical Society. 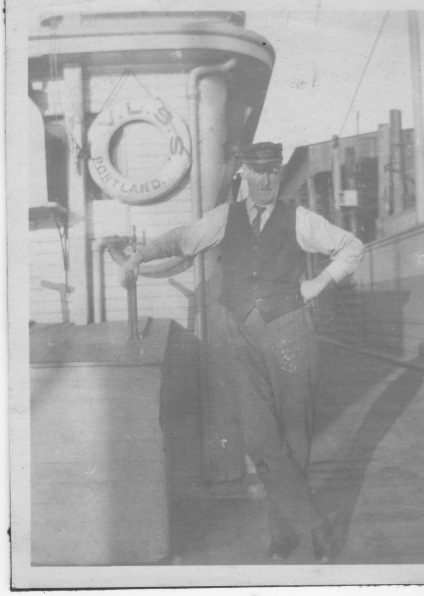 Readers of My Music Man, know the book to be riddled with anecdotes and stories about this historical transporter, including early writings by Sam Gill. Sam Gill, younger brother to my great, great grandfather J.K. Gill, was a steamboat guy. I mention Sam in my book, and share two of my favorite stories of his river journeys. From 1875 to 1882, Sam kept a log book about his steamboat engineering days mostly on the Columbia, but occasionally on the Willamette. In the last years of his life he lived in the Clifford Hotel on east Morrison Street. He was a gregarious soul, and Dunham Printing Company became fascinated with his stories, undertaking the printing of excerpts from his log. These were eventually mailed to a nephew, Harold Gill, and then on to my grandfather, Richard Montgomery or Daddy Dick. Eventually the original log book and the printed stories, Memories of Busy Steamboat Days, made it to the Oregon Historical Society where any steamboat enthusiast can read about old days on the river.

For fun…let’s travel back. Below is a section of the first article Sam Gill published in The Bulletin.

“The morning of April 2 in the year 1875 dawned balmy and clear, and I was roused from sleep by the call, “go to your window and look at Mt. Hood.” This was my first view of Oregon’s mountain gem. I had arrived during the previous night on the Steamer “Ajax,” a ship whose name was a household wold in those years. She was a wooden vessel, screw propelled, built in Mystic, Conn., during the Civil War for the government, and after the war was sold to the P.M.S.S.Co. and by them later to Oregon and California line, and at the time of my trip the line was the Ben Holliday line. At that time the service was tri-monthly, and the trip with the freight deliveries at 3 docks in Astoria and 3 on the way up river, consumed about 5 days”

“….I received impressions on that trip that I began to re-new a few months later, but to this day if I were to make the trip as I have done hundreds of times since there are certain points that always recall my trip up on the “Ajax.” My memories as I may write you occasionally will be largely of my own experiences, and associates and perhaps will prove to be of more interest to the old timers than to the younger generation. Not forgetting the railroads, and the scenic highways that follow the river so closely it is an undeniable fact that the real beauty of the river from Astoria to Lewiston is more discernable, and impressive by a steamboat, where one can view the whole and ever changing panorama at ones leisure than from the narrow limits of a window in a swiftly moving train, or a 40 mile an hour trip in an automobile, and that’s that.”

Thankfully, my dad was compelled to share these old stories, and further his family’s love of steamboats by writing and being active with the Oregon Maritime Museum, the Portland Steamer. A steamer museum docked just off Portland’s Tom McCall Park, seeping with old river history, supported by those who love the stories as much as Dad. And me? I’m happy to simply share the ones I know – and keep lending those good old books!

2 thoughts on ““But of all boats, Dad most loved steamboats””

My Tweets
Join 727 other followers